This is leading me into problems though. I always thought it was "normal" to not have the same sexual reaction towards someone you just met as opposed to someone you have a connection with. I assumed that yes you can find someone physically attractive, but that doesn't mean you get physically aroused just by looks. I have never gotten turned on by someone just from their appearance, it has always happened when someone I have a romantic connection does/says something I find attractive. I always thought that was normal. So, I guess what my first problem that is making me question whether or not I'm demisexual is that I don't understand the notion of primary sexual attraction. Is it a physical arousal, like what happens to me with someone I have a romantic attraction with, or is it a favorable opinion of someone's appearance/something along those lines?

Also, when I told one of my friends that I was thinking I may be demisexual, he didn't know what that was. I explained the concept to him and he did not understand why I would even bother with this at all. He essentially accused me of "Special Snowflake Syndrome," which as I understand it is that I am just trying to fit myself into the umbrella of LGBTQ so I can feel special. He said that it doesn't even matter and didn't seem to understand when I said I had only been sexually aroused by two people ever, both were those whom I had a strong romantic/emotional connection with. He is an LGBTQ-ally, but seems a bit uneducated on the subject. Still, it put doubts into my mind: this feels important to me, but what if it's just important to me as a tool to express myself to others? Is that bad?

Thanks for reading, I'm just trying to figure all this stuff out.

About the "special snowflake" that would be a way to "fit oneself under the LGBTQI umbrella", I would reply that.... demisexual people (as asexuals) do not have anything to fight for in a "legal/human rights" way. Their rights as citizens are respected and they don't happen to be denied anything... They can get mocked, insulted or not taken seriously... but it can't be compared with what LGB people, trans people, intersex people or queer people (quite a large umbrella this one...) experiment.
So well, I would say to that guy that.... saying to be demi isn't to "feel special"... It's just that it's not the common way of experimenting sexuality and it can be questionning sometimes...

That being said... that's right that it doesn't "change a life", I guess... I guess most demi people live totally well with it. But sometimes it just feel weird to be the only one in a group of people who can't feel anything sexually or be aroused just by looking for "sexy people" in a magazine, a tv show, a night club or a street... It can feel weird to be gay and can't conceptualize the "one night stand" thing, or the "quick fuck in a park/backroom/sauna" thing... It can feel weird to begin to feel sexual attraction only toward friends.... well. It can feel weird. I would reply something like that to your friend... But well, that's just me.

Having tools to express oneself to others is never a bad thing, is it ? I guess it can be seen as a key to understand how one's work.

I was a bit surprised at first reading this "snowflake" thing, it seems to be recurrent when people announce they're demi. I never experimented that, maybe because people can't say that about me, I'm already two letters in the LGBTQI thing lol. It's maybe easier for me then.

Being demi is like being myopic : it's not "important", but well, it's a good thing to be aware of being it, so as to understand better why we are like this or like that, why we tend to have that or this behaviour in certain situations... and well, telling people about it doesn't mean we try to get some attention on us. It's just a tool for them to understand why sometimes we can't see some things if we don't have our glasses.. or why sometimes we tend to frown to be able to see better far things (which people can think of as us "pouting" or being annoyed... lol).
In fact, it's just a way to make things clearer about ourselves :p (pun intended haha)

I definitely am not trying to claim I'm being persecuted for being demi or something like that. As far as I know, I'm heteroromantic, and I fight for LGBTQ rights more as an ally than as a queer person myself.

That being said, I do feel a bit attacked by my friend. Also, while researching information about demisexuality online last night, I found multiple posts on Tumblr that denied the existence of demisexuality in the first place, which really upset me. While it may seem silly to some, upon further thought I realize that I really enjoy putting labels to aspects of my personality (which explains my love for personality categorization systems like Myers-Briggs and Enneagram Types). This feels important to me: it's important for helping my current partner and future partners understand how I experience sexuality, and it's important to help me understand it myself. It's not a choice to only have sex with people I love, because I can't choose who I find sexually attractive. So while I have no real personal stake in the fight for legal rights, I have already experienced just a taste of "demisexuals don't actually exist" argument, and it sucks. I think that is scaring me a little bit, but I've realized that I really don't face much of a problem compared to those who are more "traditionally" a part of the LGBTQ community. I'm not trying to complain or make myself out to be a victim, because I'm not. I'm just trying to understand myself as best as I can and these are the issues that I'm facing.

Thank you for the advice as to what I should tell my friend, I think I have an idea of what to say to him in the future

Just to be clear, I wasn't implying you were claiming you were persecuted or victimizing yourself. I was just saying that what your friend accused you of is not justify, since demi are not really a part of "lgbt spectrum".
You've said :

I'm not trying to complain or make myself out to be a victim, because I'm not. I'm just trying to understand myself as best as I can and these are the issues that I'm facing.

Did you try that with your friend ? It's quite clear

Hope he will understand better, keep us informed

I think, reactions like "it's normal", "you want to be special", "you haven't met the right person yet", "you feel better than other people"... are common and are the sad part in the experience of almost every demisexual. We finally figure it out and we don't know yet that some will deny our orientation, something that we are sure, the way we are. Then we face it and we are confused. The more that asexuals also deny our existence. We feel alone... I face it every time I tell someone about demisexuality. Everything starts over again. But don't worry! We really exist. We know ourselves more than others know us, we know what is inside of us, what we feel and what we don't feel. We are demisexuals

They just don't experience it, so they don't understand how it can be... It's annoying when firstly, people tell me that I'm "normal" and then, they expect me to act not like demisexual, not this way they assessed as "normal" but actually normal, simply like sexual. Honestly, sometimes I think that demisexuality is normal and "primary sexual attraction" is abnormal.
Tell us how things are going and remember that you are the only person who can define your sexuality 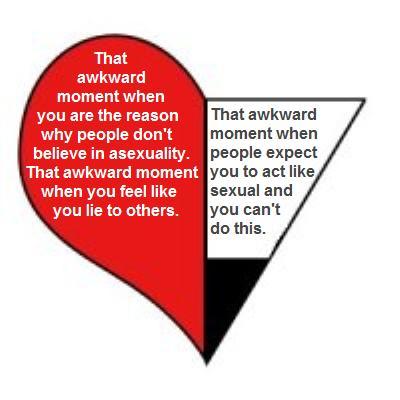